Karla FC Holloway is the embodiment of the adage, “Age is just a number.” At 55, she earned a master’s degree in law from Duke Law School and has devoted her career to gender and cultural studies and the ethics of vulnerability in law and medicine. The author of eight nonfiction books, the James B. Duke Professor Emerita of English and Law at Duke University has also been a scholar on death and dying, especially end-of-life issues in African American culture.

Now, at age 70, Holloway makes her debut as a novelist. Her first fictional work, A Death in Harlem, is replete with rich, suspenseful passages and unforgettable characters in a mystery that is far more than a whodunit.

Set against the vibrant backdrop of the Jazz Age, A Death In Harlem is wrapped in history, deception, glamour and murder. The character at the heart of the story is Weldon Haynie Thomas, Harlem’s first black policeman, who is tasked with unraveling the circumstances surrounding the untimely death of a young woman and its relationship to members of Harlem’s beau monde, its secret societies, its working class and a shadowy man with power and privilege whose interests in Harlem hold the key to the mysterious death.

Inspired by the setting and denouement of Passing, Nella Larsen’s 1929 bestselling novel, Holloway, presents an enthralling and enduring novel. 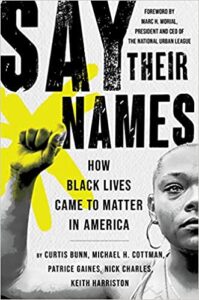